R. Kelly has had a history of sexual abuse allegations for over two decades. The famous singer, whose real name is Robert Sylvester Kelly, has been accused of using his fame to induce young people, including minors, into unlawful sexual relationships since the 1990s.

Kelly’s marriage to Aaliyah in 1994, who was 15, prompted the first major scrutiny into his inappropriate sexual conduct with underage girls.

In 1996, Kelly’s former girlfriend, Tiffany Hawkins, sued him for emotional distress and personal injuries arising from their three-year relationship. According to her, they started having sex when she was 15, which is below the age of consent, and the relationship continued until she was 18.

Also, in 2001, Kelly was sued by an intern who accused him of luring her into an inappropriate sexual relationship when she was a minor. In 2002, he was also sued by a woman in Chicago, alleging that he had impregnated and forced her to have an abortion. That same year, another woman accused Kelly of making a sex tape without her consent.

In addition, the Chicago Police Department accused him of enticing a minor into engaging in sexual acts and taping such acts. He was further charged with producing child pornographic images in Florida.

More sexual abuse charges were brought against him in 2017 when some free articles alleged that Kelly had seduced and trapped young women who approached him for help with their music careers in a sex cult. However, when the Illinois and Georgia police force checked the women, they claimed to be fine. That being said, with the release of these free articles, more women continued to bring charges of alleged abuse against Kelly, including his former partner.

Furthermore, a Lifetime documentary titled Surviving R. Kelly was released in 2019, detailing the allegations against him over the years. A few weeks later, Kelly’s record label dropped him, and his scheduled concerts in New Zealand and the U.S. were canceled. He was also charged with aggravated criminal sexual abuse, sexual assault and abuse of a person 13 thru 15 (learn more about the difference between sexual abuse and sexual assault here).

Sex trafficking charges were also brought against him in Brooklyn and Illinois. Kelly was accused of running a criminal enterprise with his associates to recruit and illegally transport underage girls for unlawful sexual purposes. He also faced prostitution charges in Minnesota, where he was accused of offering a 17-year-old girl some money to dance and undress for him. 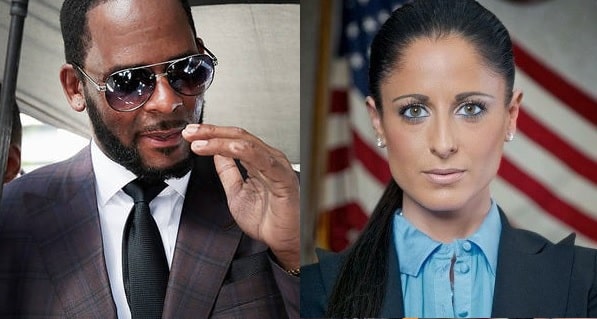 Attorney Nicole Blank Becker joined Kelly’s legal team in 2019, a few weeks after he was indicted in Illinois. She was part of his legal team fighting the charges in Illinois. Nicole Blank Becker also made her official appearance in July, 2019 during Kelly’s trial in Brooklyn. Kelly’s legal team comprises six attorneys working to defend him from all the charges, including federal charges for racketeering and violations of the Mann Act.

Nicole is the only female criminal defense attorney among R. Kelly’s attorneys working to defend him from his sexual assault charges. Nicole’s role in Kelly’s defense is to present his side of the story to the public and protect his right to a fair trial, as provided by the Constitution.

Nicole says, “we really do live in a world where the media does shape opinion. This is a case of a person being tried in the media before he gets a trial date. Part of my role is to bring knowledge to the public. So far, only one side has gotten to the public.”

Nicole believes that the women who accused Kelly of sexual abuse had entered into relationships with him fully aware and, thus, consenting to the acts. Unfortunately, Kelly had become a target of unwarranted sexual assault charges.

True to her nature as a criminal sexual conduct attorney, Nicole is committed to defending Kelly and helping more people hear what he has to say about the allegations against him. As an excellent defense attorney specializing in sex crimes, she is working with the other members of Kelly’s defense team to fight the charges against him.

Kelly is involved in multiple cases across several jurisdictions in the U.S. The charges against him have alleged abuse in four states: Connecticut, Illinois, New York, and California.

He was arrested in Chicago and put in federal custody on two federal grand jury indictments in New York and Illinois. The indictments accuse Kelly of recruiting women for sex, persuading other people to hide that he had unlawful sexual contact with underage girls, and making videotapes of his sexual encounters with them. He was also accused of sexual exploitation and kidnapping a child in New York.

During his sex trafficking trial preliminary hearings, Kelly sits with members of his defense team, such as Thomas Farinella and Nicole Blank Becker, in the courtroom as the prosecution and defense present their arguments in New York, Brooklyn, and Illinois. Kelly was denied bail pending his trial by federal judge Ann Donnelly in New York. A U.S. District Court judge named Harry Leinenweber also set Kelly’s trial date for April 27, 2020, in Illinois on 13 federal charges.

As the trial progresses, it becomes increasingly apparent that the prosecutors will implore the jury to hold Kelly accountable for the alleged crimes in their closing arguments. Nicole and the other members of Kelly’s defense team are confident, however, that with a thorough cross-examination of the prosecution witnesses, calling the defense witnesses, including Kelly’s longtime friend, Larry Hood, and delivering a compelling closing argument, they can increase Kelly’s chances of beating the charges against him in New York and other jurisdictions.

Here are some articles and interviews: