How to Prove You Didn’t Sexually Assault Someone

Being accused of a crime you did not commit can be frustrating and overwhelming, particularly if it is a sex offense. The punishments for sex crimes are usually severe and long-lasting. They include lengthy prison time to life imprisonment, fines, and community service. A sex crime conviction could also cost you your job, damage your reputation, and reduce your chances of getting housing or immigration opportunities.

In some situations, the adverse effects of a sexual assault allegation, albeit false, may even be permanent, such as mandatory sex offender registration or lifetime GPS monitoring, if you are convicted. Therefore, you should address sexual assault charges promptly and seriously, regardless of whether you committed the act or not.

You should speak with a sex crimes defense lawyer immediately if you have been wrongfully arrested or charged with sexual violence. A sex crimes defense lawyer can guide you through the criminal justice system and help you fight being falsely accused of a crime. At Blank Law, PC, our experienced legal team is willing to help you beat the criminal charges by providing solid legal representation and practical advice for proving your innocence.

How to Prove You Didn’t Sexually Assault Someone 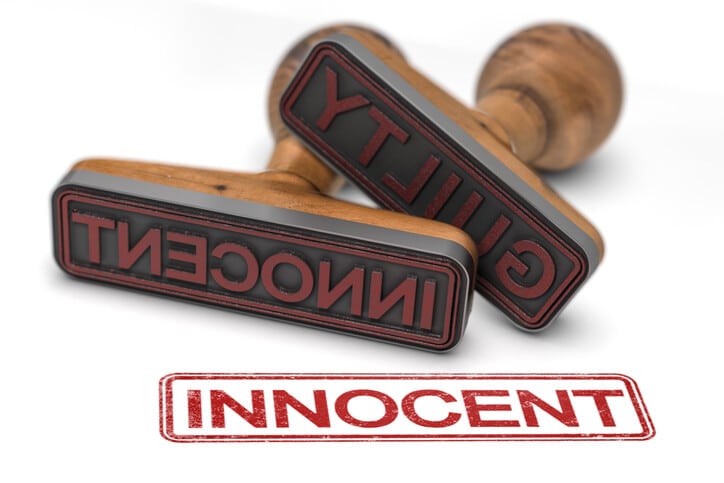 Sexual assault charges are serious, and you need to put up a strong defense if you are accused of committing a sex crime. Although the burden of proof lies on the prosecution to show that you are guilty of the offense, you need to act quickly to protect yourself (learn more about what to do if accused of sexual assault here).

There are different reasons for being wrongfully accused of sexual assault, such as revenge, spite, or misidentification. However, it would be best if you concentrated on defending yourself regardless of why you have been accused. The fact that you are innocent is not enough to keep you out of jail. Instead, you must prove that you did not sexually assault the alleged victim.

Suppose the prosecution’s case against you is solid, and you cannot show that you are innocent of the crime. In that case, you may be wrongfully convicted and punished.

Here are four practical tips to help you prove your innocence in a sexual assault case:

If you have been wrongfully accused of sexual assault, you may feel the urge to clear your name, redeem your reputation, and prove your innocence. You may also feel the need to confront the person who has accused you wrongly or explain your side of the story to anyone who may be willing to listen.

However, emotional outbursts and confrontations can negatively impact your chances of beating the false allegation. You should keep calm and remain silent if you have been arrested for a sexual assault. Do not publicly air your grievance about the false allegations on social media, as it may constitute evidence against you. In addition, it would be best if you do not speak about it with your friends, family members, or even colleagues. Silence is a powerful defense tool in sexual assault cases.

It would help if you don’t talk to the police or any other law enforcement agents because your words may be used against you at trial. Often, people are afraid of the consequences of refusing to speak with a detective during an investigation, but it is advisable to remain silent unless you have your attorney present.

It is also pertinent to state that remaining silent will not prevent the police from arresting you or showing up at your house with a search warrant. Keeping quiet is for your protection.

Hire a Criminal Defense Lawyer to Fight the False Allegations

Before you take any drastic step to defend yourself in a sexual assault case, you must speak with a criminal defense attorney. All your thoughts, recollections, and fears should be shared with your rape defense attorney, who can provide guidance and assistance. Your lawyer is bound by the law to protect your confidentiality because of the attorney-client relationship, so you can trust them.

It may be tempting to fight the false allegations against you all by yourself since they hold no truth in the first place. However, you may be found guilty of the offense if you cannot prove that you did not commit sexual assault. Thus, you need a lawyer to help show that you are not guilty.

When choosing a lawyer to represent you in a sexual assault case, you should ensure that the attorney is experienced in handling sex crimes. You should also ensure that the knowledgeable criminal sexual conduct attorney you hire has a proven track record of success and can defend you excellently. Learn more on what to look for in a criminal defense lawyer here.

Gather Evidence to Support Your Defense

The strength of the prosecution’s case usually relies heavily on providing evidence to support the claim against you. You also need to gather all the available evidence to prove your case. Physical evidence from the place the alleged offense occurred and documentation, like video and audio recordings, pictures, and text messages, would be helpful to prove your innocence. Testimonies from witnesses or experts may also be of use.

Therefore, you should note everything you remember about the incident leading up to the false allegations. Your CSC defense attorney can help you determine which ones would be most helpful in your defense.

Sue the Complainant for Defamation

A powerful way to fight the charges against you may be filing or threatening to file a lawsuit against the person who has wrongfully accused you. The impending punishment may drive them to reveal the truth or drop the charges against you. However, this strategy may not work in every situation, so you should consult your lawyer to see if it would be worth a shot in your particular case.

Are There Legal Defenses Against a False Sexual Assault Charge?

If you have been wrongfully accused of any crime involving sexual violence, you need to reach out to a defense lawyer. Navigating the criminal justice system while dealing with false accusations can be complex and overwhelming. Thus, having an attorney to guide you through the process makes it easier and more effective.

Several legal defenses can be used to beat a sexual assault charge. They can be broadly grouped into three categories:

If you are charged with sexual assault, but you had a physical or mental incapacity at the time, it may serve as a valid legal defense against the criminal charges. In some states, the defense of insanity may completely absolve you of the consequences of committing sexual assault. However, in some other states, it may only serve to reduce the penalties, and you will not be completely absolved.

Also, if the victim alleges that you sexually assaulted them alongside another offense, like domestic violence, you may be unable to claim that you were physically or mentally incapacitated successfully.

Generally, the law does not criminalize consensual sexual activities between two adults unless it involves the commission of offenses, including battery and domestic violence. Therefore, any act involving sexual penetration or sexual contact between two consenting adults is not a crime. You can fight the charges against you by showing that the alleged offense occurred with the victim’s consent.

However, this defense is inapplicable if the alleged victim is a minor below the legal consenting age. According to the criminal laws, the age of consent in Michigan is 16. This means that children below 16 cannot consent to any sexual activity. You may be prosecuted and convicted of sexual assault in such circumstances. Also, it does not matter that you did not know that the victim was incapable of giving consent at the time.

If you are falsely accused of sexual assault, another simple, but effective, defense against the charges is innocence. You can claim that you did not commit the offense. If you were not even at the crime scene when it occurred and can show a solid alibi, it might be enough to establish your innocence.

Also, if the false allegations are due to misidentification, you may be able to use it as a valid legal defense. You may prove misidentification by questioning the victim’s general credibility, thus showing that their testimony cannot be relied upon.

If you have been falsely accused of sexual assault in Michigan, you need to hire a knowledgeable attorney as soon as possible. Michigan Attorney Nicole Blank Becker specializes in sex crimes and can help you beat the charges against you. With her unique advantage as a former prosecutor, she can help you create aggressive sexual assault defense strategies and establish your innocence. Contact her at (248) 515–6583 to schedule for a free consultation.