Ghislaine Maxwell Should Give Up Others Involved – Attorney Nicole Blank Becker

Attorney Nicole Blank Becker appeared in an interview at Fox Business – Mornings with Maria regarding the Ghislaine Maxwell case.

Here’s the link to the video interview clip: 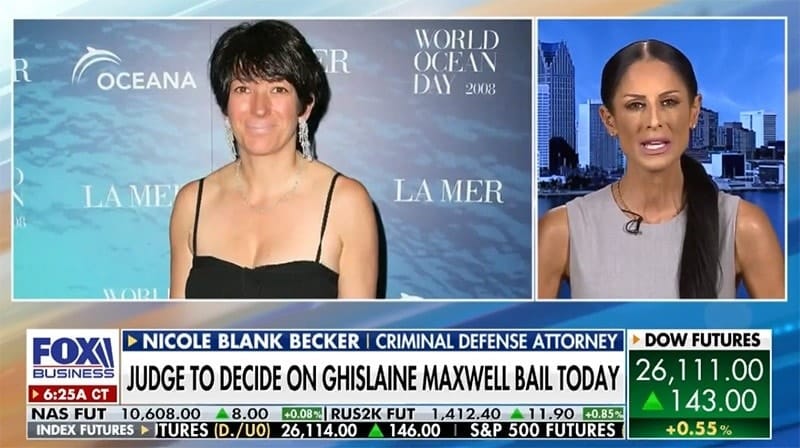 CHERYL CASONE: Arraignment day. Jeffrey Epstein’s longtime confidant Ghislaine Maxwell is in court today. A judge will determine whether the British socialite should be let out on bail until trial. Maxwell faces charges she recruited teenage girls for Epstein to sexually abuse in the 1990’s.

Joining us now, an attorney who has led and prosecuted sex crimes for more than a decade, now criminal defense attorney who represents R Kelly, Nicole Blank Becker. Thank you for being here, Nicole.

NICOLE BLANK BECKER: Thank you, Cheryl, for having me.

CHERYL CASONE: So the big question, do you think that she gets out on bail? The prosecutors say that she is a major flight risk.

NICOLE BLANK BECKER: So when it comes to bail, Cheryl, it’s really an uphill battle, I feel, for most individuals who are accused of doing a sex crime. When you add the sex crime element to it, it really adds the extra oomph, should I say, for the prosecution in their abilities to try and keep that individual in jail because of risks of flight and any potential really problems that she could have or associate with while she’s on the outside.

CHERYL CASONE: So it sounds to me like you’re saying you don’t think she gets bail today. Because I also know that the prosecutors– there are multiple reports out this morning that her cell phone was wrapped in tinfoil. That when they got to the residence where she was holed up, that they saw her through the window trying to run to another room. I mean, they’re going to use all of this today, right?

NICOLE BLANK BECKER: 100%. And I think that because in the– the defense was asking, with some legitimate arguments I would say, that being the COVID-19 argument, which we could get into. But yes, I definitely think they’re going to throw whatever they can out there, make the world aware of what she was doing that is very telling of how she may be in the future regarding this case.

CHERYL CASONE: Well, we should also say, within this indictment, the allegations are that it’s exploitation, it’s trafficking. It’s also– it’s three girls, and this goes back to the 1990’s, prosecutors are telling us that some of the victims, one or more, might be in court today. Do you think that the judge will actually, you know, take in that testimony from victims?

NICOLE BLANK BECKER: No, that’s very uncommon. The victims, the alleged victims in this case, they are typically not going to be heard from until and if there is further proceedings in the future. If they come, perhaps they’re coming to observe. But no, Cheryl, I definitely don’t believe that they will be heard from. I think the prosecutor, i.e. the government, will speak on their behalf.

CHERYL CASONE: Do you think that she cuts a deal, Nicole, with the government?

NICOLE BLANK BECKER: Cheryl, here’s what I think. I think, because she is known right now as that sort of gatekeeper, literally the puppeteer if you would behind this whole huge, very salacious scandal, I think the smartest thing that she could do, if she believes in the allegations are correct, she certainly should start giving up anyone else that she may have been in cahoots with, the conspiracy.

NICOLE BLANK BECKER: I think that would be her biggest, smartest move right now.

CHERYL CASONE: Some very important people are probably shaking in their boots this morning.

Nicole Blank Becker. Nicole, thank you very much. We shall see how that arraignment goes later today.

British socialite Ghislaine Maxwell is the ex-girlfriend of the late convicted sex offender Jeffrey Epstein. She is due to appear at a bail hearing that will determine whether she stays in prison while awaiting trial on charges of trafficking minors for Epstein.

Ghislaine Maxwell  was arrested on 2 July and faces up to 35 years if convicted.