Here’s a snippet of the news article published by SunTimes.Com, regarding the statement of Attorney Nicole Blank Becker about R. Kelly’s situation inside the prison after he got assaulted by a fellow inmate last month.

Imprisoned R&B singer R. Kelly, who was assaulted at the Metropolitan Correctional Center by a fellow inmate last month, is in cell hell.

“Fear and terror have left him petrified and paranoid,” said Nicole Blank Becker, one of Kelly’s attorneys who talks to him frequently.

In an exclusive interview with Sneed, Becker claims Kelly “can’t sleep and is now afraid to leave his jail cell during the two hours he’s permitted daily to venture out. His insomnia is serious.”

“Robert [Kelly] is scared for his life … terrified every single day since he was beaten in his jail cell by fellow MCC inmate Jeremiah Shane Farmer a month ago, she said.

The kicker: Becker claims Kelly tells her there is a prisoner lockdown every time his fans conduct an outdoor protest near the MCC. “His fans are already all over the internet protesting his incarceration,” she added. 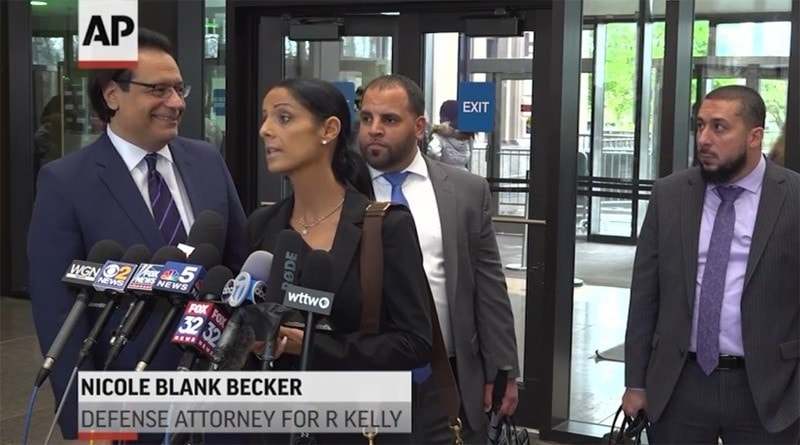 “Recently, Kelly left his cell to walk down the hall,” Becker told Sneed. “He said it felt like the longest walk of his life.

Adding new details to Kelly’s prison attack, Becker claims Kelly “was lying down with a blanket covering his face and wearing ear pods on the bottom tier of a bed bunk at 9:45 a.m. on August 26, when someone wearing shoes entered his unlocked cell and began to stomp and kick his face,” she said.

“In an attempt to defend himself from the bottom bed tier, he [Kelly] and his attacker were then pepper sprayed by a corrections officer.”

To add salt to the wound, Becker says Kelly told her “the previous occupant of his new MCC jail cell following the attack was his attacker, Jeremiah Farmer! She claims Kelly now fears reprisals from inmate friends of his attacker who are housed near his cell.

“I’ve been told Farmer has now been sent to a new location,” she added.

Becker also claims Kelly told her “one inmate in his MCC unit is accusing him of stealing his songs, and his prison commissary-purchased mp3 podcast recorder has yet to be returned by the MCC,” she added.

Kelly, who can’t read and write, now can’t listen to music, she said. “And he’s gained a lot of weight since COVID-19 due to lack of exercise.”

Read more of this news article in this link:
Assault has left R. Kelly petrified with fear, wrought with insomnia, lawyers say